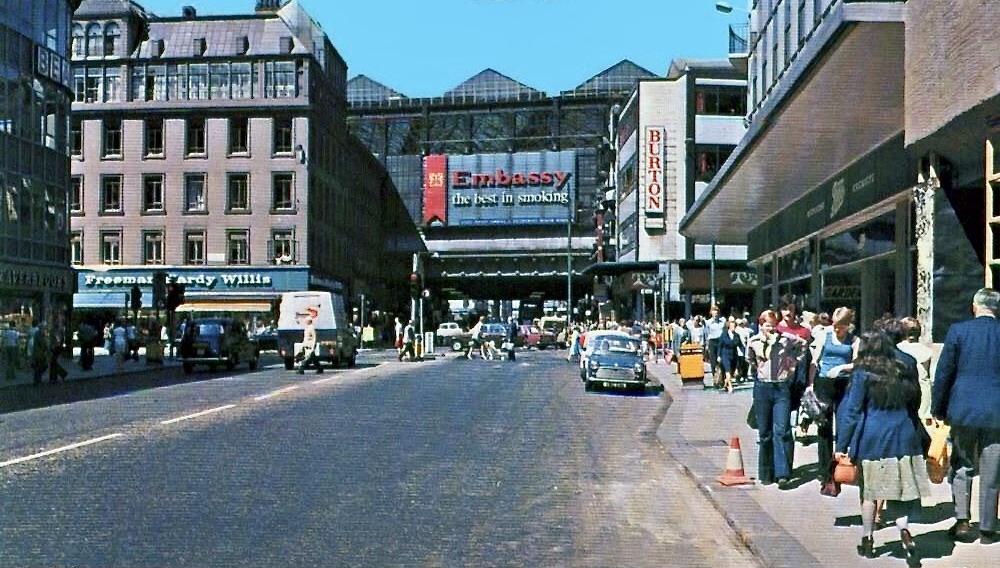 There was a point in our mid teens when we felt it was time to cast the net a bit wider.
We’d progressed from playing in the street, to going up the local park, then a bit further afield, but generally within a two mile radius of our base…. but a bit like tiger cubs there came a point when we were ready to explore and roam new territories.

Invariably all roads led to….. Glasgow

Looking back, going ‘up the toon’ to Glasgow city centre was a rite of passage, it’s what the older kids did and like raiding Vikings they usually returned laden with treasure….

The desire to start making our own choices typically came at at a point when parents were still picking some of our clothes and ushering us to old-school barbers, where glossy headshots of Peter Marinello covered the cracks on the walls, and where condoms rather than coriander conditioners were on display – ‘something for the weekend sir?’

Even if you had the temerity to ask for a Peter Maranello they’d respond, “aye no problem”, pull out the electric razor (the big old clunky ones with the cord) and execute the only haircut they knew how to administer…. the one that invariably left you with a big red rash on the back of your neck for a week.

Seeing the older kids with their goodies and cool haircuts inspired some of us young uns’ to follow their trail, however, it was a pursuit that needed funding, which is why a couple of us started up a paper round when we were 14 whilst others took up delivering morning rolls.
The disposable income we duly acquired was set aside for regular sojourns to Glasgow where we would aspire to emulate our elders.
Swanning around town before a triumphant homecoming – brandishing our 23rd Precinct & Krazy House bags with pride.

Going up the town per se was nothing new, after all we’d had years of being chaperoned to DM Hoey’s and Freeman, Hardie & Willis for winter coats and sensible shoes.
However, heading into town with your chums, with your own money burning a hole in your pocket, was a different proposition altogether, a proper adventure.

Once you’d been up a couple of times and knew your way around, part of the fun was going off-piste… exploring and navigating Glasgow’s grid system via lanes and backstreets and witnessing sites you’d rarely see in the Bearsden bubble – sites like adults blootered on Carlsberg Special Brew before lunchtime or witnessing the colourful characters that worked and hung around Paddy’s Market.

We could spend hours roaming around the town…..

Loitering in record shops – rummaging through the racks of vinyl and requesting to hear albums in the listening booths or the available headphones (Dark Side of the Moon with its stereophonic effects was always a good one).

Roving around department stores, from the sports dept, to the electrical dept, before bashfully taking in the sights and scents of the perfumery dept.

Visiting the legendary Tam Shepherds Trick Shop in Queen St, where the sickly scent of stink bombs was never far from the front door….. before heading to the rag-trade end of Argyle St, up towards the Trongate, where all the ‘on-trend’ clothes shops were housed.

A big part of the adventure of course was the journey…. for us it was the train from Westerton to Queen St or the ‘105’ double-decker (blue) bus that shuttled between Drumchapel and Buchanan St.

Our parents would always warn us about being careful, “keep an eye out for any trouble” but they probably didn’t realise that the biggest danger came from within and involved daft stunts like crossing live railway tracks to get from one platform to another or jumping off moving buses before our bus-stop… for a dare.

On reflection it showed that we probably, (no, definitely!) weren’t as ‘grown up’ as we thought we were.
Fortunately though, despite a few scrapes and close calls, we all lived to tell the tale, and would subsequently watch on like a David Attenborough documentary as the generation below us took up the mantle and followed our lead.

In the meantime…. we of course, now veterans of stepping outside our comfort zone were preparing to take the next big step in our personal development…. getting served in pubs ‘up the toon’!

I’m not sure when I started having a say in what I wore off field.

No surprise then that my first flirtation with fashion was football related.

I remember seeing a picture of the Liverpool footballer Steve Heighway in a football magazine wearing a nifty ensemble, cutting the page out and asking my parents if they could get it for me. They took this on board, quite pleased for once that I was taking an interest in clothes but of course came back with something quite different. This was 1970 and understated clothes like Steve’s were not de riguer of the day.

I learnt a valuable lesson at an early age, do your own shopping!

1970 was a seminal year, the transition from primary to secondary school, the start of going to youth clubs and school discos and parties with girls in attendance, so how you looked, suddenly became ‘a thing’.

In 1970 everything was BIG. The collars on shirts, the lapels on jackets, the width of trouser hems and especially the width of ties, the amount of fabric used in that period must have been colossal.

Also, the colours were mental; the gaudier the better, bright oranges, vibrant purples, lavish lilacs, shitty browns, nothing was off limits.

Great looks if you’re a pimp working your ‘ladies’ on Times Square but not so cool for a 12-year-old on the mean streets of Bearsden.

I had a big mop of curly hair when I was younger, in later years everyone thought it was a perm which was annoying, particularly c.1978 when everyone did have a perm (and a moustache) so I look back now and wonder if my parents had been influenced by watching too many Blaxploitation films when they were choosing my clothes.

Thankfully mixing with older kids at secondary school and playing boys club football against teams from other parts of Glasgow gave me a wider perspective on fashion and fuelled my interest. Some of the trends that followed were national (you could always tell by watching TOTP), but some were very Glasgow centric.

First came the skinhead look which consisted of Doc Martens (or Monkey Boots), Oxford shirt or Fred Perry polos. Wrangler jeans and a denim jacket or a Harrington Jacket. We cut our hair short, but not that short and we never got into Ska or Reggae or any trouble come to think of it. We were the politest, softest skinheads you could meet, a complete discredit to the culture.

Next came our suede-head period, which was a favourite of mine and partly inspired by going to see the film A Clockwork Orange. The component parts consisted of Levis Sta-prest trousers, Ben Sherman gingham check shirts, Bass Weejun loafers (penny loafers) and a Crombie coat, with a full-length umbrella as an accessory.

This was a smarter look altogether and our parents seemed to be both pleased and befuddled, as we left the house in our formal attire, brandishing umbrellas on a perfectly sunny day.

Skin & Suede-head fashions were nation-wide but with regional twists, Levis Jeans rather than Wrangler in some parts of the country, etc.

However, there were a couple of really interesting Glasgow trends that followed, based on the principals of made to measure customisation, and the sheer gallus nature of the local punters.

I remember seeing my first Arthur Black shirt and being mesmerised, I hadn’t seen anything like it. It was the coolest thing I had ever laid eyes on; it also had the bloke’s initials embroidered on it, genius!

Arthur Blacks Shirts and Slacks was an establishment in St Enoch Square where handmade clothes were produced to your own specification. They specialised in western yoke shirts and at Arthur’s you could choose your own colour combinations as well as how many buttons, pleats, zips, epaulettes and pockets you wanted.

As you can imagine there were some weird and wonderful designs and it also reflected the wearers personality from plain and sensible to wacky and weird. Unfortunately, there are not a lot of images in circulation but there’s a couple below to give you an idea, although they’re from the wacky category.

Following on from this, a wonderful shop called Argyle House in Buchanan St, offered a similar service specialising in knitwear. My pride and joy back then being a wool turquoise, full zip cardigan with a Royal Stewart tartan yoke and my initials PF embroidered on it, I wore it to school one day and a teacher pulled me up and said there were two O’s missing – quite funny for a teacher…

Of course, these artisan classics didn’t come cheap, and Mums & Nans from Clydebank to Rutherglen were busy trying to work out how to knit their own versions with varying degrees of success.

The shirts and jumpers would later be copied for mass production and sold in boutiques like Krazy House and City Cash Tailors in Glasgow and worn by the likes of Bay City Rollers, which of course was the sign for us to move on.

In 1974 we started going up the town to discos, with Clouds and Shuffles being the main ones for our age group back then.

At this point the influence of our pop idols had started to kick in and we were wearing platform shoes, patchwork jeans or high waist ‘oxford bag’ trousers, with Simon shirts and long woollen cardigans or satin bomber jackets. There were also a few ‘influencers’ I think they’re called now, guys like my pal Hughie Kinnaird who always had the right look back then.

Interestingly the cardigans, bomber jackets and trousers were often purchased in girls’ boutiques as they weren’t available elsewhere (Chelsea Girl or Miss Selfridge in Lewis’s department store, both on Argyle Street) we were bamboozled at first trying to work out the sizing, asking the assistants for an age 15 as they only had 8’s, 10’s, 12’s and 14’s available, we were soon schooled.

There’s a pic below of me in Blackpool, September weekend 1974 wearing part of this ensemble. I’ve no idea why I’m wearing a hat with the hat ribbon worn as a scarf/tie, but I can only think that the years of being dressed as a pimp by my parents had a lasting and damaging effect.