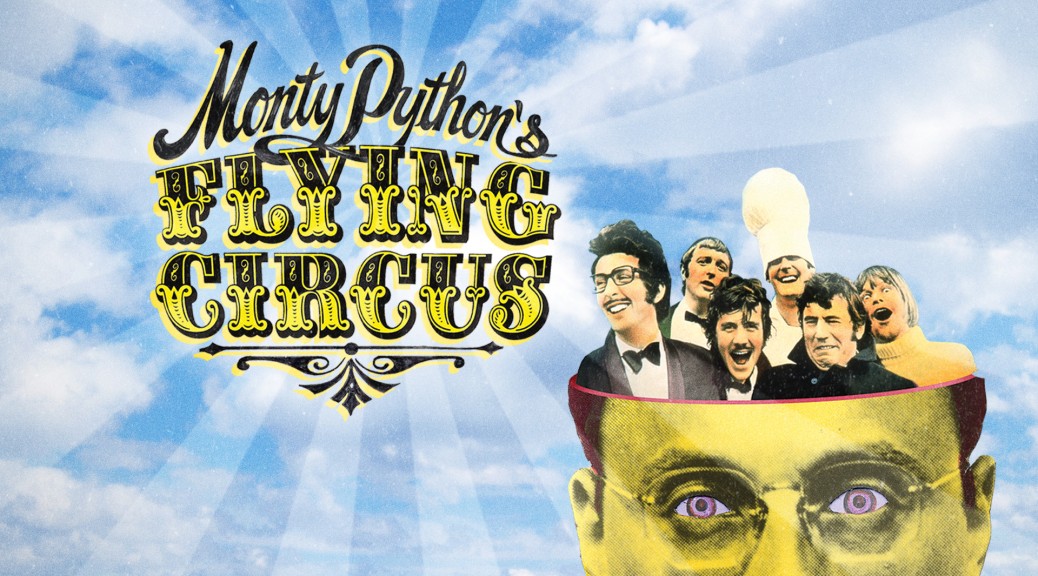 I will endeavour to present this article to you, the general public, without the use of quotes. Thank you.

We kids of the 60s were brought up on a numbing TV diet of the crass and corny. Think “The Dick Emery Show”, “On The Buses” and “Steptoe & Son”. The bland – “Charlie Drake”, “Harry Worth”, “Hugh & I” and the innuendo strewn and mildly titillating “Carry On” films “Up Pompeii” and of course “The Benny Hill Show”. There were a few stand outs – “Dads Army”, “The Likely Lads” but on average our comedic viewing was……………………… well, average.

“Monty Python’s Flying Circus” emerged from the ashes of “The Frost Report”, “At Last the 1948 Show” and “Do Not Adjust Your Set” in 1969 but didn’t come to my attention until a couple of years later. It continued the surreal elements of “Peter Cook and Dudley Moore” and Spike Milligan’s “Q”. It became an unexpected success.

Five ‘Oxbridge’ dons and a Yank cartoonist wrote, created and performed a sketch show which stretched the boundaries of what we had previously known and witnessed. This was no traditional nor conventional comedy sketch show with a beginning, middle and end. Continuity was abandoned, chaos was unleashed and we teenagers lapped it up.

This was our generation’s comedy, our Beatles and Stones moment of hilarity and mirth and best of all……………………….our parents didn’t get it !

“Turn that rubbish off !”

“Isn’t there snooker on the other side ?”

I think the show went to air on a Thursday evening and on Friday morning, the registration class was a buzz with soliloquising falsetto voices. Come recess, a pit of 4th year Python prodigy would slither sideways across the playground in a great arc flicking it’s tail and baring it’s fangs at any stray juniors with a caustic Cleese like come down.

We would then curl up in a huddle to re-enact the previous evening’s episode. We must have looked like a convention of young Tourette sufferers with our silly walks and Gumby impressions. (Having a knitted tank top, I was half way there already !)

Cross country running was the staple of many a PE class. Off  twenty odd gangling teenagers would trot around Kilmardinny loch a few times, sufficient to fill a double period. A group of us would hang back and turn a sharp left up to Graeme’s basement for a few tracks of “Another Monty Python Record”, it’s cover a crude crayon scratching out of Beethoven 2nd Symphony in D Major, then rejoin the stragglers 15 minutes later in our Upper Class Twit of the Year personas.

The 70s brought us the cinematic “Monty Python and the Holy Grail” and the iconic “Life of Brian” with all it’s ridiculous accusations of blasphemy. What could be better publicity than rabbis and nuns protesting with placards !

Sadly the circus packed up and left town. Cleese to the equally iconic ‘Fawlty Towers’ then basically any film that required his cameo. Palin went off on his travels. Gilliam became one of the leading film directors of the time. Idle tried to revive some sketches on Broadway and Chapman and Jones left the stage altogether.

The word pythonesque is now the standard bearer for anything deemed as ‘surreal comedy’.

Even today, when I pick up the axe to chop some fire wood, I can’t help humming to myself the first few lines of “I’m a Lumberjack”. Or maybe the smirk is because…

“I cut down trees, I wear high heels

Suspendies and a bra

Who can’t resist on hearing the final refrain of Sousa’s “Liberty Bell” blowing that squelching raspberry.

Or is it just me with my highfalutin ideas ?

Come on. I know you want to say it. In your best falsetto voice now……………