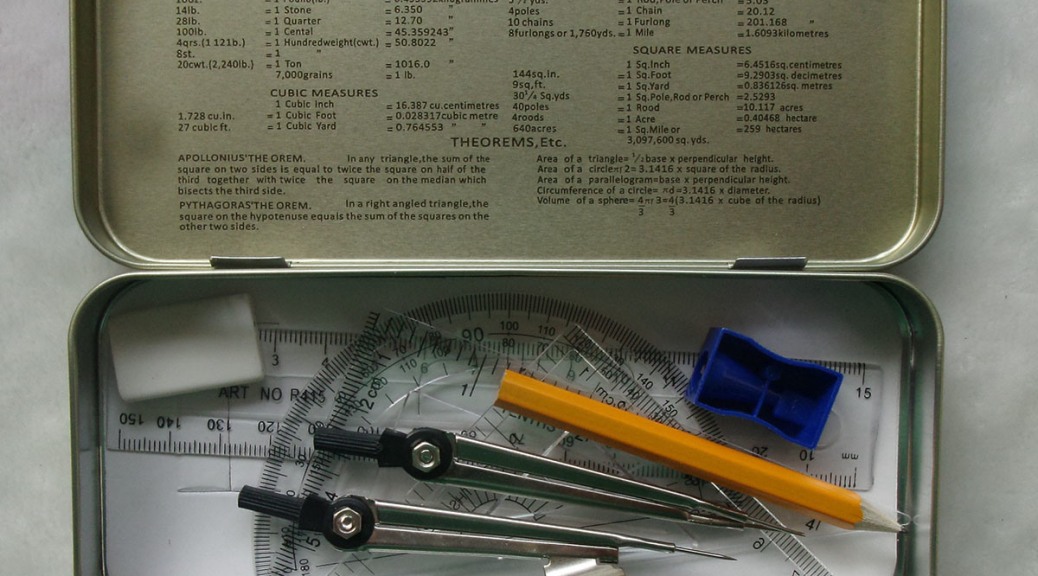 I think enough time has now elapsed for the authorities not to take any retrospective action, so there’s something I’d like to offload. The guilt has weighed heavy for 45 years and I need to unpack it.

I was kack at Maths and Physics.  There was no way on God’s earth I was going to pass my Highers in these subjects. So, being a lad of reason and invention, I hatched a cunning plan. If it worked, then hold my place at Glasgow Uni!

For those subjects, we were allowed protactor sets into the exam – I presume, so we could work out angles and stuff.

I intentionally bought one in a metal case, the bottom half of which was sort of copper / bronze colour. I was a bit ropey at Art and Chemistry too, so I’m not 100% confident of either the colour or alloy. If indeed it was one. Not that it really matters.

Anyway – using the compass from the set, I scratched some notes and formulae on the bottom of the tin. Sorted.

Unlike the tin shown above, the inside lid was clear and plain – it did not have a directory of handy reminders for the absent minded mathematician. So when the teachers inspected our bags and permitted aids upon entry to the exam hall, they had no reason to suspect the devious plan afoot.

It’s true, I’ll concede, sweaty palms and a racing heartbeat belied my outwardly confident, and let’s be honest, frankly cocky demeanour as I followed my pals into the exam hall and took my seat over by the corridor that led down to the dining hall.

I felt so smug. An Evil Villain type laugh echoed through my mind. Don’t you just love it when a plan comes together?

“You have three hours. You may turn over your papers, now.”

Questions 1 & 2 seemed OK, but the others called for implementation of the masterplan. Surreptitiously, I turned the tin over … aaargh!!

I needed daylight to reflect off the coloured metal, so my etchings could be read, and I was about as far away from a window as could be.

My heart sank. My hopes of University and a career in Dentistry or Law vanished in that moment.

I flicked through the exam paper and cobbled together answers of sorts for a couple more questions. But it would never be enough.

I watched some kids leave as soon as it was permissable to do so and remember mentally regarding them as ‘not the brightest.’

It was then that laugh returned to my head. Except… it was no longer controlled by an Evil Villain type. The mirth was softer, sympathetic almost. It broke off laughing momentarily to introduce itself as some entity called Karma and reminded me that really, I myself was one of those ‘not so bright ‘ kids; that the only reason I was still sat at my desk was simply that I didn’t have the bottle to admit it.

The next couple of hours dragged by, during which I watched the pupils I knew to be smart cookies up and leave and head home in time for Crossroads.

In the end, having so much time to myself wasn’t so bad. It afforded a period of reflection: who wants to spend the next fifty years peering into halitosis infected mouths and cleaning last night’s broccoli from somebody’s nicotine stained teeth?

And who in their right mind would wish to pass the whole of their working life doing sums. Because after all, that’s just what Accountants do.

And why bother about going to University? Wouldn’t it be better to be out on the big wide world and earning some moolah?

My destiny, it seemed, was preordained and I’d be following my father and grandfather before me, into a career in Banking. More of that in later article, perhaps.

Yeah, that’s right- my name’s Colin (Jackie) and I’m a cheat … just not a very good one.