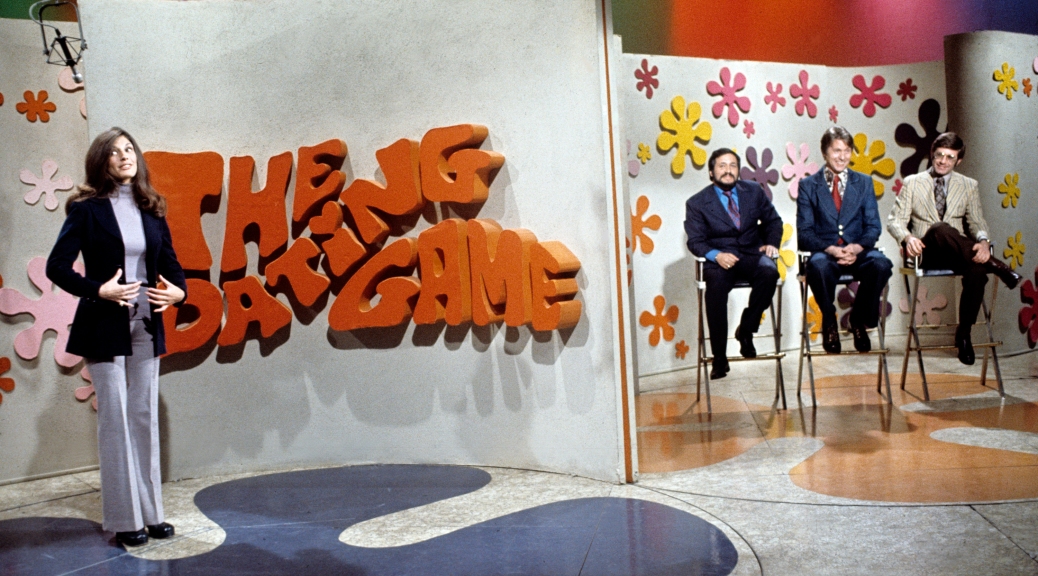 As a kid in 1960s America, I grew up on a diet of  TV sitcoms and game shows that portrayed wholesome American family values: My Three Sons, Leave it to Beaver, Bewitched, The Dick Van Dyke Show, I love Lucy, The Dating Game and even the Addams Family,  My mother stayed at home to raise me and my brothers and  my teacher Dad would come through the front door at the end of the day in his trade mark trilby and trench coat with his pipe in hand:  “Hi Honey, I’m home!” Think ‘Pleasantville’.

I never questioned that I would one day date a handsome, wholesome boy. We’d go for a soda-pop and a hot dog after a baseball game, get engaged and get married.  That’s how it worked, right? The first I heard of  Women’s Lib was in the summer of ’69 when my older cousin ventured outside her house without wearing a bra; causing our grandmother to have a conniption fit and haul her back inside for a lecture.  That was the end of THAT! Where we grew up, women weren’t decent unless they wore at very least a full Playtex Cross-Your-Heart bra, under-slip, pantihose and a girdle. I had a training bra at the age of ten, which amounted to no more than two triangles of cotton fabric on an elastic band. But I still had one. My best friend Catherine even had a training girdle but Mom put her foot down:

“That will squish your ovaries honey.”

I didn’t know what or where my ovaries were at ten years old!

After we had moved to Birmingham, West Midlands in 1970, my mother – being a Southern Belle of ‘good stock’ – wasted no time in seeking out the ‘right sort of people’ in her eagerness to make ‘good connections.’ Not easy on the border of the Black Country. After seeing the skulking lads from the church hall disco at my fifteenth birthday party, she took matters into her own hands to get me on the right track to finding a suitably wholesome date – preferably a rich one.

My parents met a couple called the Handcocks from Edgbaston (“good area honey”) at a dinner party. Dad was impressed:

The Handcocks had a son called Douglas who was shorter than me. Great. Douglas was no oil painting either and I know, I know – beauty lies within – but when you have raging hormones and your bedroom walls are festooned with pull-out posters of your favourite heartthrobs from Jackie Magazine: David Cassidy, Marc Bolan and David Essex –  I hoped at least for a dazzling smile and dimple. Jeeze – even the lads at the church hall disco had an element of cheeky charm tucked up their Ben Sherman shirts sleeves. Worst still, Douglas wanted to become an accountant.  I mean, who actually wanted to be an accountant? I thought he was deadly dull. I hoped for a boyfriend with a tad of charisma.

Mrs. Handcock and my mother were in cahoots and arranged a date between me and Douglas. I  was apoplectic. He was awful – so B – O – RING! Mom came back swiftly at me with,

“Just stick with him Honey; he might have nice friends.”

That’s how her mind worked. Never mind that I couldn’t stand him; he was rich and lived in a detached house: STICK WITH HIM!

I had three dates with Douglas – way beyond the line of duty. On our first date, he took me to a party  in a splendid, gothic house complete with sweeping staircase, stained glass windows  and grand, marble fireplaces.

Mom would have loved it and would have probably have tried to marry me off to the boy whose party we were attending. Mr. Handcock picked me up in his Bentley which went down well with my mother.

“Class will always out, honey.”

As soon as we stepped through the Minton tiled entrance hall, I ditched Douglas and made a bee- line for a tall, lanky, captivating boy who sported a navy capped-sleeve t-shirt, Levi’s and a fetching string of shell love beads around his Adam’s apple.  His floppy fringe hid brooding dark brown eyes. I hung around his neck as we slow danced to 10.C.C.’s ‘I’m Not in Love’. Poor Douglas didn’t stand a chance. In fact, I ignored him until his dad picked us up. We sat on the back seat of the Bentley in silence all the way to my front door.

“Goodnight, Mr. Handcock and thank you, Douglas – for a lovely evening!”

Despite my complete indifference towards Douglas he invited me – or rather, his mother invited me – to their house for dinner and to stay the night, so that she and Mr. Handcock could become better acquainted with me (in other words, ‘size me up’ as a suitable girlfriend for their only, darling son).My mother made me a new long flowery ‘frock’ like those in Laura Ashley, with a ruffle at the hem and big sleeves with a sash, which I hated. I looked like a Holly Hobby doll.

Impressing Mom with their obvious ‘good breeding’, Douglas and his father picked me up at seven-thirty sharp, one Saturday evening in 1975.  Douglas awkwardly thrust a bouquet of pink carnations in my hands.

“Here. These are for you.” I handed them to Mom who gushed like she was the schoolgirl:

“Oh my, why Douglas you’re so thoughtful. Andrea  – what do you say? I’ll find a vase.”

I rolled my eyes and climbed into the back seat of the Bentley.

At dinner, I was seated between Douglas and his mother as I tackled the typical 1970s fare;  Honeydew melon with a cherry on top, Steak Diane followed by Black Forest Gateau and a cheese board.

The Handcocks enjoyed a bottle of Chianti in raffia.  Despite my acute embarrassment, I managed to mind my p’s and q’s and even to use the correct cutlery (well, I was born to be a Southern Belle) as I fielded questions from Mr and Mrs Handcock

“Andrea , your mother tell us that you play the piano. You must play something for us after dinner.” (Oh shit! My hands would sweat and slide on the keys.)

“And where do you got to school Andrea? The God Awful School? I don’t believe we know that  one.”

As I flopped into bed in their luxurious guest room (Who had those? When my grandmother visited us from the States, she had to be farmed out to a family down the road because my brothers shared a room and I had the box room.) the thought fleetingly crossed my mind that if my mother’s hunch was right – I too could one day own a house with two bathrooms and four-ply towels.

For our third and final date, Douglas took me to see ‘Airport ’75’ at the movies, where I coughed throughout the entire film. A man seated behind me tapped my shoulder and offered me two Polo mints.

I gagged and coughed all the way up the gangway. Douglas did the decent thing and followed me, called his dad on a public payphone and never saw me again.

This didn’t stop our parents from meeting socially from time to time, but the penny had finally dropped.

My mother was right of course; I did meet some nice friends through Douglas… and I didn’t become an accountant’s wife!

3 thoughts on “the dating game”