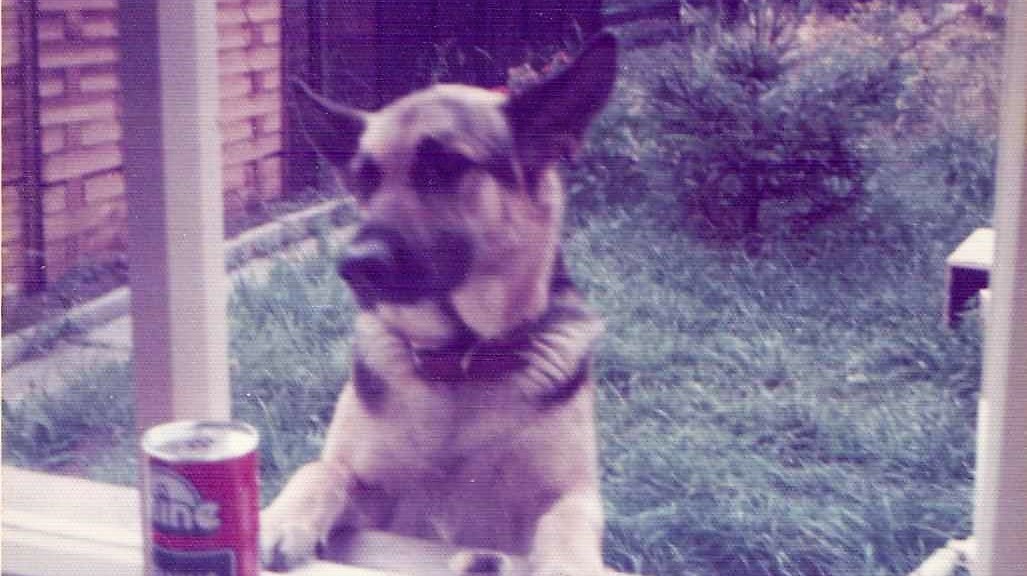 The 1960s and ’70s were a great time to be a dog – and a child. My brothers and I were pretty much free-range kids; growing up on a rural college campus in Virginia where Dad lectured in History and Mom was at home for us. We were totally unencumbered by the pressures of an adult world. There were only two grown-up rules: don’t talk to strangers and be home in time for supper. Running barefoot through endless summers with our dog Shiloh, we were pack animals; our friends and their dogs ran with us – always at our side as we navigated our way through childhood.

Nobody that we knew ever walked their dogs on a lead – what an absurd notion!4We simply opened the back door and let Shiloh out into our back yard and the wider campus. Shiloh would sit at the back door as Dad said, “Out? Out to bark?” whereupon she would race along the back porch and bark three times!

Attitudes towards dogs were different then  – nobody ever picked up dog shit. Our yard was full of it and in the long hot summers we would find chalky white deposits in the clumps of grass. We called it fossilised shit. Nobody cared or worried that we might get some terrible eye disease from it – we just ignored it – unless you were unlucky enough to step in it but that was your fault – you knew it was there!

Shiloh had her neighbourhood pack, including a Golden Retriever called Lanny and Old Jack, the black Labrador who would sleep in the middle of the road, forcing traffic to go around him – and they did! Even Joe the bus driver knew Old Jack and would give him a wide berth,  You can set your watch by him – -yes-siree-bob!”

But Shiloh only had eyes for Nicky the Wolfhound; a well-known local bounder who had already sowed his wild oats with Doris the Dachshund in a secret tryst in her garage, producing unlikely looking puppies.

In the American South, a dog is a ‘dawg’ – even Elvis sang about it.  Troublesome ‘dawgs’ are ‘hound-dawgs’; not to be confused with ‘huntin’ dogs’ which are bred to run with the pack.  Shiloh was typical of the ‘hound-dawg’: a German Shepherd who chased small critters – rabbits, squirrels and the occasional rat – frequently puking them up on Mom’s orange velvet sofa.  Rumour had it that she killed a neighbour’s pet rabbit, but Mom refused to believe it. In a legendary show-down on the front porch with the afflicted rabbit’s owner – who had threatened to call the Sheriff – Mom rebuked the accusation and told the woman to get off her property or she would be the one calling the Sheriff!

Then there was the time that Shiloh chased the Dean of Faculty up one of our apple trees. He had the audacity to come to help himself to our apples with a ladder and buckets. Shiloh decided she was having none of his sass; keeping him up that tree for some time, snapping at his heels long enough to teach him a lesson – or until Dad called her off.  (Mom said “it served him right, as the apples were rotten and full of wasps anyway!”)  When still a young puppy, Shiloh nipped our neighbour, Mrs. Wyatt, on the calf, as she strolled past our house when we were playing in the front yard. “She was just defending her family,” said Mom. As I say, attitudes were different then. Oh sure, you had to have a dog licence but if your dog bit someone it was rarely reported. The Sheriff might mosey over to your house and give your parents a caution – then enjoy a cup of coffee with them on the front porch.

My brother Dale once stepped out of the bathtub when he was a young boy, as Shiloh lay on the bathmat.  The young pup watched for a moment then pounced; nipping the poor boy where the sun doesn’t shine! Dale yelled and Dad could probably be heard clear across the campus:

“GODDAMN SON-OF-A-BITCH DAWG! SON, GET ME THE MERCUROCHROME!”

The ‘hound-dawg’ pup slunk off and lay low until suppertime.

(NB/ Mercurochrome was a mercury based antiseptic, popular with mothers of the baby boom generation. It stained your skin pink and had a mighty sting on open cuts and grazes. It was finally. considered as unsafe and banned in 1998.)

Shiloh was finally caught red-handed one Christmas Day as she lay nonchalantly across the dining room table gorging on the turkey, which Mom had put their to ‘rest’ before carving. We had hamburgers that year.

When we made the difficult move to the UK in 1970, we had to leave Shiloh behind with a neighbouring farmer, as quarantine laws were so strict then. We were heartbroken. To make us feel at home in Birmingham, Mom and Dad surprised us with a young rescue German Shepherd called Cleo.

She was a gentle, beautiful dog who filled a great void in our lives. When my cat Brandy had her litter of kittens in an old packing crate in the garage, Cleo was on hand to help; perhaps sensing that this little cat wasn’t very strong. Cleo watched the birth, helped lick the kittens clean and carried them very tenderly in her mouth out onto the lawn to play with them. Sadly, Cleo became ill with a twisted bowel after only a few months and we had to have her put to sleep. My mother cried for a week. She had invested a lot of love and hope into Cleo, to help turn our dark days into bright ones.  Sadly, little Brandy died from a heart attack when she was being spayed but we kept one of her kittens, Frisky.

After a campaign that lasted some weeks, Mom came home on the bus one dark winter evening with a bundle of fur under her coat. My brothers named her Zoo. She was another German Shepherd rescue puppy with huge ears that met in the middle and big paws which soon bounded their way into our hearts.  Her party piece was standing on her hind legs at the dining room window, farting as she watched life go by behind the net curtains – usually when Mom and Dad had company. Dad would just quietly strike a match – always worked.   Zoo took an instant dislike to Frisky, forcing the cat to live on the veranda roof.  Every now and then they would have a spectacular fight, with the cat holding her own. She lived up there for years.

Our small, inordinately neat back garden in Birmingham, quickly became decimated.  Mom’s refusal to acknowledge dog shit meant that the grass turned yellow and Zoo shredded the flowers; tearing them by the roots from the borders and strewing them widely across the lawn. She was particularly fond of shredding the Pampas Grass. I can see Dad now – rake in hand – trying to put the Pampas grass back together so Mom wouldn’t notice.  Zoo used our small ornamental pond as a toilet, so Dad decided to fill it in. What Dad didn’t do was drain the pond first; he simply filled it with top soil – right on top of the pond weeds and tadpoles, which turned it into a quagmire. The neighbourhood cats loved it and we had frogs for ever more.

It was Zoo who found her way into the under-stairs cupboard  on Christmas Eve morning in 1970 and chewed up  the presents which our parents had carefully scrimped and saved for; leaving a pair of fluffy mule slippers missing a heel,  the Beatles’ ‘Let it Be’ album with a teeth marks on the corner, the ‘Fall of the Roman Empire’ with a shredded spine and a bald Tressy doll. Mom was distraught and trudged back into Rackham’s on the Number Nine bus on Christmas Eve afternoon with the little money she had to replace what she could. Zoo was indeed a hound-dawg.  The ‘Long and Winding Road’  spun on the turn table after dinner as Mom cried silent tears over the dishes.

And finally, my brother Dale and I still refer to the following incident in which a teenage friend of ours – I’ll call him Mike – was watching TV at our house one afternoon in 1977. He suddenly jumped up from the sofa to pop to the loo, startling Zoo who had been asleep at his feet. She jumped up and  nipped poor Mike in the nuts, causing him to leap higher and emit a piercing yell which reverberated down our road as he ran upstairs clutching his crotch. Dale said,

“She just nipped him in the bud.”

Our children grew up with two dogs: Alfie our beloved black Lab and Millie, our Springer Spaniel; each one a ‘hound-dawg’ in their own right with their own idiosyncrasies and characters. We have recently had to say one last ‘goodnight’ to Mille (aka ‘Mills’, ‘Mrs. Mills’, ‘Cruella Da Mills’ and ‘Miss Havisham’) after twelve years of crazy antics, unquestioning devotion and fierce loyalty. Letting go is the hardest part; Mills had my heart and the upper hand (or should I say upper-paw) until the end of her long and happy life.

We still have our four year old chocolate Labrador, Humphrey, who is proving to be a ‘hound-dawg’ and a half!

Dogs teach us compassion, help us laugh at ourselves and make us better humans – especially ‘hound-dawgs’.